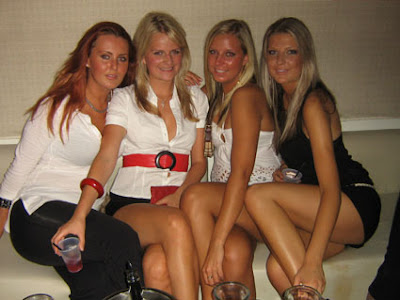 As men we might go out on the date-hunt alone. But women, especially women of quality, are rarely found out at clubs and bars socializing alone. They travel in wing-woman packs, or mixed groups of men and women protecting each other from slime-balls, drunken idiots, and boring AFCs (average frustrated chumps).

But you are different because you recognize this fact and you’re  going to not only overcome it but use it to your advantage.

If you opened, demonstrated value (showed you’re interesting and attractive) and disqualified yourself from being the “next guy” to heighten attraction in your target,  you should be receiving “Indicators of Interest” (IOIs) from the woman in set that is your target. This concept is as easy as it sounds. An IOI is something a woman does (maybe even subconsciously) to show you that she’s interested in you as more than just a friend.

2. She touches you in a playful. A tap on the arm, friendly punch to the shoulder or joking hip check.

3. She fixes her hair or other aspects of her appearance in your presence.

5. She’s willing to do simple things you ask her to do: “Here hold this cup.” or “Switch places with me, you stand here.”

6. She laughs at your jokes even when no one else does.

The key with IOIs is to notice them and to act accordingly. What does that mean exactly you ask? Well, if a woman is showing you she’s attracted to you then you can start escalating things to the next level chief. Doesn’t that sound like fun?

The rule of thumb is to notice 3-4 IOIs then to begin to work on escalation, namely isolating the target to build comfort. So, it may take you some time to get out of your head about saying and performing your Openers, DHVs, and DQs for you to also be able to keep track of IOIs but eventually this is the point to sarging often. That’s why PUAs like to run the same material over and over again – because it allows them to be able to focus on other things like counting IOIs. Try it for yourself.

Let’s say you notice those IOIs your next step is to try to get some alone time with her.

Here’s where the group dynamic comes into play. It’s tough to get awoman away from her friends. It’s tough because her friends are her safety net and it’s there job to keep her safe. But provided you did everything right you should have not only been charming your special lady but also the group so you’ve got that going for you.

But you still need to follow a few rules to keep her super team of friends from worrying, so here’s how it goes:

You notice 3-4 IOIs from the target and you know you’ve achieved attraction to you. Now address the group say:

“Even though she’s trouble (feisty, a mess, etc., insert an adjective here that calls back a DQ), there’s something about your friend I find interesting. You guys mind if I talk to her alone for just a few minutes right over there?” (point to a spot near the group but far enough that you’re out of earshot).

Now, that sentence you just read doesn’t get said to a group of women or any group often. It’s totally alpha and confident to ask the group for this and they’ll respect it. Unless there’s a really drunk AMOG or a super tough wing-woman that loathes you the group usually always just nods and says “Sure, go ahead!”

You can’t prepare yourself for all contingencies so let’s just say the situation goes smooth and no one objects which is 9 times out of ten. The target will have heard what you said so at this point look her in the eye and say “Let’s talk for a minute over there before I go.” Then put your arm out suggestively so that she takes it.

Walk with the target over to your isolation spot – you’re now in isolation.

Why and How to Build Comfort

You build comfort because meeting and dating men is a scary prospect for a  woman. Think about all the psycho dudes she’s met in her life and the guys that have just tried to get in her pants. It’s no wonder she has her defenses up. You need to earn her trust and show her that you aren’t crazy and that you’re interested in more than just her body. This is the key to her really wanting to give you her number and her answering when you call it a few days later.

That’s the why and here’s the how. The Cube is a great routine to use in comfort building because it’s a good way to get to know someone on a deeper level. Feel free to run The Cube as your Isolation Routine.

In addition to running routines a good option in the comfort building phase is to listen. You already have this girl interested in you so now you need to get to know her. Ask her broad open ended questions: “What are your passions? What are you all about? You seem different from these other women in this place, what makes you special?” I think you get the idea. If she starts talking and doesn’t stop that’s a great sign. Your job now is to listen intently and look into her eyes. For more routines I recommend the Routines Manual or Routines Manual 2.

If you need a complete guide on pickup, I recommend Revelation or – as it’s a bit cheaper – Magic Bullets. Both are outstanding books and at least one of them is a must-have for everyone trying to get better with women.

For detailed reviews go to: www.bestpickupbooks.com